I discovered D&D when I was six. Several older kids were hunched around books and dice at a corner table in the library. I was fascinated and asked to join, but they told me I was too young. It was one of the best things that’s ever happened to me.

See, I don’t deal well with being told I can’t do something. It brings out that competitive streak, and I’ll move heaven and earth to prove someone wrong. In this case it took me four more years. I saved up my allowance, then got a paper route without asking my parents. They were furious when they found out, but allowed me to keep it. 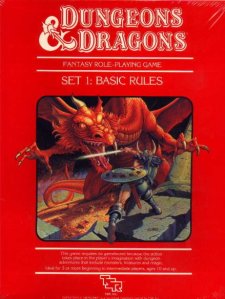 Every dime went to one of two places. Fantasy novels, or D&D books. I started with the red basic set and cajoled three of my friends into playing. We were instantly hooked. Years passed and faces changed, but the games remained the same.

We’d gather every afternoon in my backyard to play D&D, Shadowrun, Rifts, or the World of Darkness games. These games allowed the unconstrained use of our imaginations in a way video games and even novels couldn’t match. We could do anything, be anyone.

I’ve seen similar stories repeated all over the internet. Hundreds of thousands of gamers spanning four decades, all loving and exploring our own unique worlds. Unsurprisingly nearly every game master also wanted to be a writer.

We spent hundreds of hours fleshing out worlds, characters, histories and stories for our players to enjoy. In short, we became storytellers and most of us didn’t just love it. It became part of us. Something we needed to express.

Fast forward to today. Those gamers all grew up. We went on to be IT guys and programmers, but part of us never forgot our roots. The urge to create and share amazing stories was still there. This has led to a curious phenomenon.

2010 saw the first explosion of eBooks. Amazon, iTunes, Barnes & Noble and now Kobo allow anyone to publish a book. All of a sudden tens of thousands of authors could bring their fantasy worlds to market.

Many are terrible. Some are amazing. There is now an entire generation of authors who got their start in the same fantasy worlds. You’ve probably heard of at least a few. Patrick Rothfuss and Jim Butcher still play D&D.

Dungeons & Dragons: The Rise of the Indie Author