I’ve gotten a ton of questions about which books I’m releasing when, especially from Deathless fans. That’s fair, as we haven’t seen a new Deathless book since Halloween. I’ll address you guys at the end of the article. =)

For those who don’t know I’ve gone full time at this author thing. That means I’m putting a book out every month for the rest of the year. Here are the upcoming release dates: 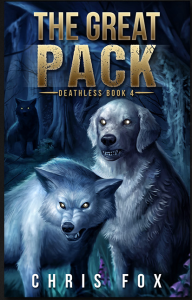 If you’re a Deathless reader you probably wanted to punch me when you saw the August 21st date. Why have I published so many books, instead of The Great Pack?

Because Deathless is a vast, complex universe. After the admittedly messed up cliffhanger in Vampires Don’t Sparkle I needed to adjust for the, uh, massive changes. I can’t say more without spoilers, but those who read VDS know that the ending changed everything.

I’ve been furiously plotting and world building, and this go around I’m plotting books 4-6 at the same time. That means more prep time, which is why The Great Pack has taken a while to release.

Deathless is my baby. It’s my first series, and I want to do it justice. That means a little more time than some of my easier series. Thank you for your patience. I promise, I’ll do my best to make the wait worth it.

My Publishing Schedule for 2016